Whilst lying back with my feet up over the festive break, demolishing jars of Nutella and freaking out watching The Bridge (watch it – Netflix), I reflected back on what was quite a progressive year for DanYELL. Let’s not forget I had to battle getting up every day for my day job (like we all do), as well as designing in the evenings and weekends! My friends think I’m mad and they’re probably right.

SO, getting back to the point – whilst thinking about what has happened to DanYELL as a small creative business in 2014, I began listing a few highlights. The biggy was DanYELL at Peep Peep Show Coffee pop-up store 🙂 It seemed to whizz by and I pretty much panicked my way through the entire process.

Pop-up stores have been sprouting up all over the place in the past year and I don’t see them slowing down. I thought I would note down everything I did for mine and hopefully I’ll be able to improve on the next showcase. I also want this info to be useful to other designer/makers who are thinking about having a pop-up space. Depending on the size, it can be quite intimidating but also ridiculously exciting 😀

Here’s how it started…

When I discovered that there was an opportunity for me to take the next step and build upon the craft and design markets that I’ve been taking part in, I thought, “Go for it. Don’t think about it – say yes and accept the offer”. I did…and then a sweat broke out. I LOVE to worry, you see.

In September I agreed with Peep Show that I would rent out the space for the last 2 weeks in November 2014. Now, having a full-time day job in a law firm, I think I underestimated the amount of preparation time I would need in order to design, print and make my products. This wasn’t just a table I had to fill – it was a room. This also wasn’t taking in to consideration the fact I had my first wedding fair to prepare for with my small stationery business, Paperpattern. Are you beginning to build a picture of my life? Eat, day job, draw, draw, draw, wee bit of sleep – you need to laugh really, ha! This isn’t me complaining by the way – I’m at a stage where I’m trying to work out how I can comfortably shrug off the day job and go full steam ahead with DanYELL and Paperpattern 🙂

Okay, so I had 2 full days and a couple of evenings to transform the space due to the fact I had no holidays left to take in my day job. That’s what happens when you go to Japan for 3 weeks *claps*! I got the keys to the store on a Monday morning and it all began from there. I had a very vague idea as to how I wanted the space to look but the challenge really began when I got there and came face to face with the reality of a blank, white room and a shop front to paint.

Kari, the amazing helper I had for day 1, was a star. She quickly got started on the shop front which I wanted painted predominately white. It soon became apparent that the pakora pink wasn’t going to be hidden in a hurry, so around 3 coats later, the front was clean and crisp.

This was probably the first time in my life where I can say I watched paint dry. It wasn’t great to be honest, so don’t try it.

The next step was to tackle the space within the shop. My plan was to doodle on the walls but that idea was soon shattered when I started inking with my gorgeous, fat Posca pens from CASS Art store, Glasgow. At times, the ink just didn’t take to the wall. I’m putting this down to the paint that was coating it because I have never had any issues with the pens before. I persevered for a while and managed to draw some lines but eventually I had to admit defeat and try to come up with a better and quicker way of marking the walls.

ENTER NEON DUCT TAPE (or duck tape)! Looking back, this tape pulled the whole display together AND it took about 15 minutes to position and apply in the areas I wanted. I applied it to the walls and let it continue on to the floor, which for some reason, was so satisfying! 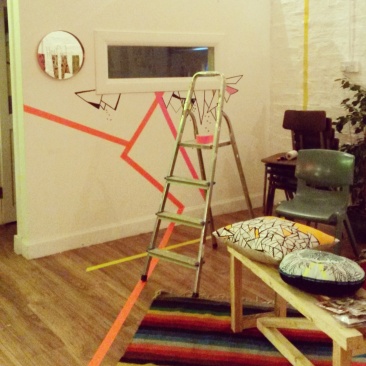 The next challenge was how to display my products – scarves, cushions, jewellery and prints. I was on a tight budget so I wanted to refrain from buying fancy display units and props so I decided to use items I had in my flat and furniture that was already in the space. Joanna kindly let me use her handmade wooden benches, which ended up acting as a support for my laser cut jewellery display.

I had 18 digitally printed scarves to display – a mixture of crepe de chine silk and viscose jersey. Through my experience of small designer/maker markets, it quickly became apparent that customers wanted to touch, pick up and try on the scarves but seemed a little shy to do so. This came down to the way in which the scarves were displayed. Customer feedback/research showed that if scarves were hanging rather than folded on the table, the more likely the customer would pick them up. *TIP* – always display or have a mirror to show potential buyers what the item looks like on them.

I decided to hang rope from one corner to another creating what effectively was a washing line! This allowed me to casually drape the scarves over and it made it easy for customers to handle them, try them on and put them back without them feeling they had messed up the display. I had a large wooden frame (which was once our kitchen table) propped up against a wall in our flat so I thought, I’d put that you use. After attaching a few rows of twine to to the frame, my silk scarves had a new temporary home.

My cushion range was dispersed about the space which broke up the uniformity of the lines of scarves.

SO, as you know, I have a full-time job. This meant I couldn’t be in the space with my products for the duration of the pop-up. Risky, I know, but there’s always a way around things 🙂

My solution was to have a ‘made to order’ service only, with order forms displayed. I made it clear to customers by displaying signage in the space and briefing the coffee shop staff in case customers asked any questions or wanted further information.

Customers would place orders with the knowledge that their products would take up to a maximum of 3 weeks (from the day the pop-up ends) to be made and delivered in time for Christmas. The advantages of this arrangement was:

All in all, this process worked for me. It really was the only way I felt comfortable handling it whilst I was working.

After 2 full days and and 2 evenings of staring at walls, hammering, moving furniture and untangling necklaces and scarves, DanYELL at Peep Show Coffee was ready to face the public.

On the run-up to the launch night, it was important to spread the word as much as possible. A couple of weeks before the opening,  I designed an A5 flyer and sent the design off to Vistaprint for printing. 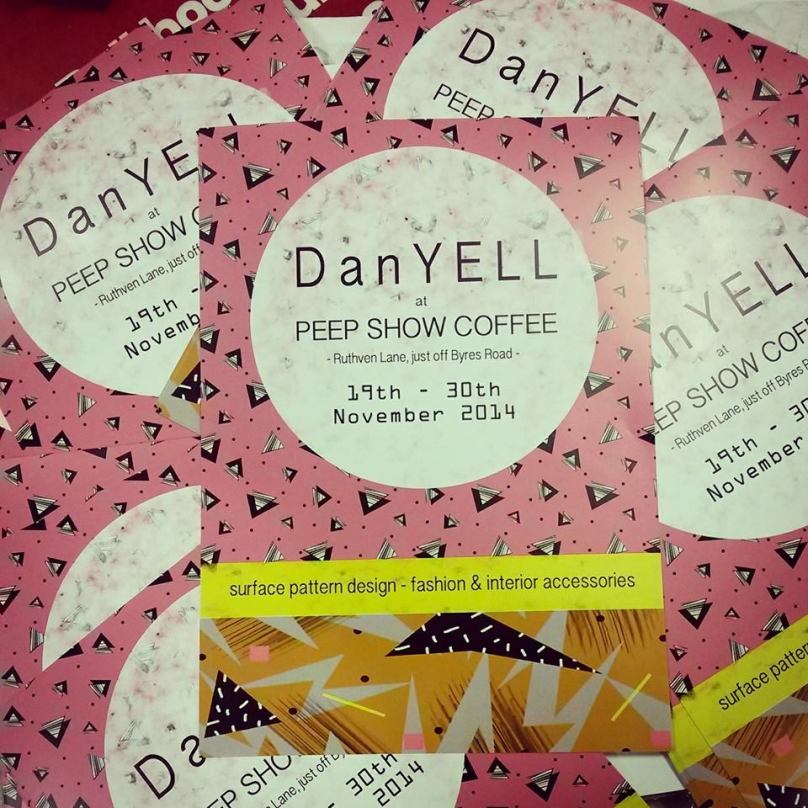 I pinned these around the city – in art stores, independent businesses, handed out to friends and family, work colleagues and gave a bundle to my lovely mum who slipped them in to a few of her friends bags…

Social media was the platform that helped me most. I found I got a great reaction from posting up little daily teasers to Facebook, Twitter and Instagram. People love to know what’s going on behind the scenes! Also, it was an insight as to what products would be available to buy. 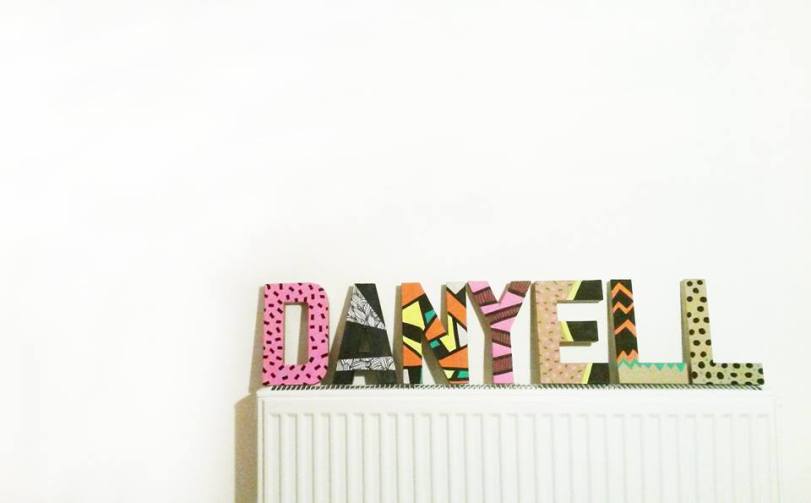 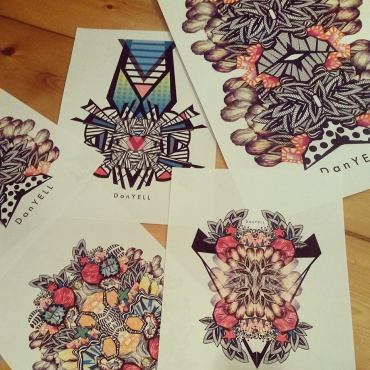 I created a homepage banner for my website which instantly informed users about the pop-up. Upon clicking the banner, it diverted to my Facebook event page.

Local bloggers were kind enough to spread the word through their sites and social platforms, not only building momentum but gaining a few fans along the way which is always a delight! I’d like to take a brief moment to say, “Faaanks” to Lisa-Marie over at Last Years Girl and Paper Sawdust for the lovely words and for punting my stuff, ha!

Lastly, I created a FREE advert on What’s On Glasgow which is really easy and worthwhile. The What’s On Network  could come in handy for anyone based in Central Scotland as they have sub-sites to specific areas, Glasgow being only one of them.

So my mum got all excited and bought lots of nibbles and drinks for everyone. Let’s not forget the cake stands she had a feud with whilst trying to assemble them. Jokes aside – she was a great help and eased the pressure off me, so thanks mama 🙂

To say I was overwhelmed with the response of the opening night is an major understatement. The place was PACKED with friends, family and folk I have never met in my puff! I took that as a positive sign. I informed everyone of the ordering process, worrying that it was going to flop but by the end of the evening, my little order basket was rammed!

My photographer friend, Nadia of Valkanova Photography , was designated happy snapper on the evening and captured some classics –

So I guess that’s it! Was the freaking out worth it? YES.

Set yourself challenges this year and carry it through to the best of your ability. If your budget’s limited, put a positive spin on it – you just have to be more creative and inventive which can’t be a bad thing 🙂

PS: I got featured in The Herald Homes magazine due to a journalist spotting the pop-up – hurraaaah!